I felt quite confident in the identifications since there are so many commercial whale watching groups that photograph the whales they see and then post summaries of their observations. There are plenty of photos of Pepper and quite a few of Shuffleboard. Narrowing down to a near-match is the only tricky part. I browsed fluke photos until something caught my eye.

Here's a nice summary of some observations of Shuffleboard putting on a good show just a month after the Morgan was out there:
http://whalewatch.neaq.org/2014/08/2014-sightings-august-11.html. That's from the New England Aquarium/Boston Harbor Cruises whale watching tours. You can see in the first image below (a screen cap from that page) that the tail markings are clearly the same whale that was along the Morgan's port side on July 11 visible in Mystic Seaport's "Whale Ho!" video at 00:39, 01:02, and especially from 02:22 to 02:47 (the other images below are screen caps from that video). So as long as the folks from whalewatch.neaq.org have it right, and I believe they do, then this was Shuffleboard. You can see Pepper at 02:03 in that video briefly but much better in the still photo I pointed to last night.

I checked Mystic Seaport's video from July 12, too, and there are a few frames when you can just make out the flukes on a couple of whales, but it's harder to see anything clearly --just the luck of the draw in the photography angles. Can anyone manage an identification in that one? There are bound to be some better images from the support flotilla.

You asked, "Is there a dataset on the web where I may see a list of identified humpback whales?" While there are apparently large offline collections, I haven't been able to find any real database online. In any case, it turns out that the collections of images from the whale watching tours are quite useful since they're often organized as blogs, and you can look at photos for a given year. I looked at photos from this summer to identify Pepper and Shuffleboard. If you want to learn more about these specific whales, try an internet search with the whale's name in quotes; search on something like ' humpback whale "shuffleboard" ' for example. 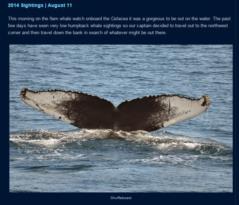 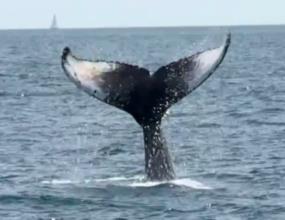 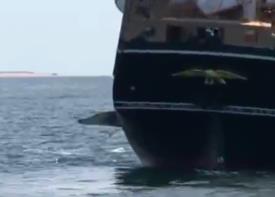 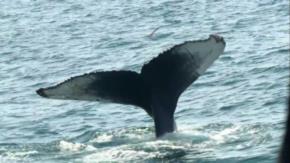