Re: Moonlit nights before Stellwagen...
From: Richard French
Date: 2014 Jul 9, 22:39 -0400
Frank and Michael,
Please count me in if you get together to discuss lunars! I've become captivated by the subject and I've been doing some independent derivations of the method to see how close I come to the tabular versions. If the weather cooperates, I'll attempt lunars with Saturn and Mars on Friday night - alas, Frank's arrival night does not look promising, weather-wise, although Friday itself looks like a good sailing day. In any event, let's think about getting together after our voyagers to compare notes. I'd very much like to have a chance to look at some historical log books and to sort out the process of decoding the arithmetic.
Dick

Michael Dyer, you wrote:
"In this particular journal kept onboard the ship Rodman of New Bedford, 1830-1833, KWM #766, the keeper would draw little celestial figures in the margins whenever a lunar sight was taken."

That logbook author was into colors! The symbols for Sun and Moon (with facial features on the Moon and the exaggerated horns arcing around to make a C shape) were common enough, but that's the first example I've seen where the "artist" used colors for the symbols. I'm attaching a little snippet from a logbook from 1809 (log of the Reaper, Mystic Seaport's collection). Also, it appears that the large TIFF image you attached previously got corrupted somewhere, so I am also attaching what I could get from that file for reference. It cuts off just below the colorful "celestial figures" for the Sun and Moon.

"These were taken at all hours of the day and night, but more frequently during the day."

I've looked through dozens of logbooks chasing down lunars and my rough estimate (without any detailed statistics) is that about 85% of lunars were shot in daylight, but some individual navigators had a clear preference fow shooting lunars at night. Celestial navigation was primarily a daytime activity in the 19th century.

"We hold a number of copies of Ward’s Lunar Tables published between 1834 and the mid-1850s all of which were carried on shipboard."

And one of them is on display for the general public, isn't it? At least it was when I last visited a few years ago. There was quite a cottage industry in lunars tables. Part of Nathaniel Bowditch's fame developed from his unique lunars tables, and they certainly were a selling point for early editions of the "New American Practical Navigator" (though contrary to legend, Bowditch neither invented lunars nor revolutionized them). I have speculated that part of the reputation for complexity of lunars arose from the great variety of tables and methods, not all of which were effective.

"Many of them have whole pages of calculations penciled in them. It appears from the entries in the Rodman journal that the keeper combined chronometer readings with his lunar observations.
Those "scrap paper" calculations are the most fun. An intriguing puzzle is distinguishing classroom exercises from calculations worked at sea for actual longitude determination. There's a logbook at Mystic Seaport with dozens and dozens of pages of lunar calculations that begin with classroom exercises and then transition at some point --and I am not quite sure exactly where-- to actual navigation work. Alas, the calculations are not tied to the logbook entries in every case. Without that context, they're little more than pages of accounting work.
I would very much like to sit down and talk with you about examples of lunars you've seen in the collection there. I've explored some logbooks at New Bedford Whaling but without any guide... Maybe after the voyage... Tomorrow night is fo'c's'l night for me.
Frank Reed
ReedNavigation.com
Conanicut Island USA 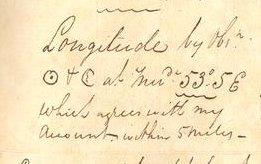 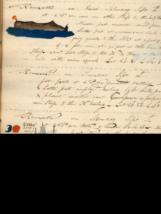 McDowell and Whiting Professor of Astrophysics