Thanks for the kind words on my essay. The page that you're talking about with the mathematical tables is indeed from Manjiro's translation of Bowditch. A complete copy of the translation is at the John Mung Museum in his hometown of Nakanohama - it's obviously not an original, and the sign that accompanies it makes it very clear that it's only a copy, not the original. I took a photo of it through the glass, thus the reflection of the lights.

You mention that Manjiro's "level of education was very low" but that's not the case. He might have been an illiterate fisherman when he left Japan, but he eventually became a lecturing professor at Todai University in Tokyo until he died, and as he was fluent in both Japanese and English he was very in demand. He studied military science in Europe (one of many Japanese people who were allowed by the Meiji government to sail abroad and study in foreign countries. Niijima Jo is another famous scholar from Japan who sailed abroad and later founded a university in Japan).

The Japanese also at that time had no navy and no concept of navigation out of view of the shore. Because of their policy of isolation, they never had any need to use celestial navigation, but sailed by following the coastline. All of their trade ships were shallow water ships only, and although they had knowledge of navigation from the Dutch, they had no way to apply it, as Japanese were not allowed to sail on Dutch ships. As a Japanese person who actually knew how to sail and had done it professionally, Manjiro introduced the practical concept of navigation, taught celestial navigation to the Japanese using his translation of Bowditch, and was instrumental in building the Japanese into a naval power.

Ger, I've very much enjoyed following your exploration of John Manjiro's life and legacy in New England and in Japan. I included a section on him and his influence on navigation history and connection to whaling history in a presentation I gave at a navigation conference at Mystic Seaport back in 2010. When I moved to New England in 2012, one of my first history pilgrimages was a visit to the so-called "Whitfield-Manjiro Friendship Society" just to see what they had done with the place. It's an odd little institution, but it seems to be extremely popular with Japanese visitors. They have a nice collection of items for sale. I picked up an inexpensive, beautifully illustrated edition of a translation of the story of Manjiro's adventures in whaling and the United States, "Drifting Toward the Southeast". Here's a photo of the cover: 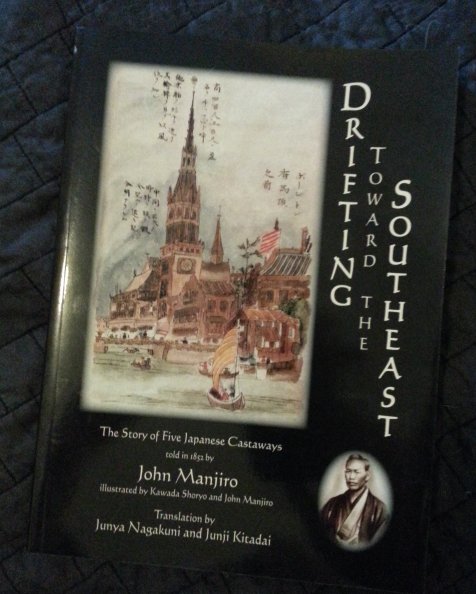 I highly recommend it for anyone else who's interested in learning more about the subject of Ger Tysk's research. The introduction, by the way, is by Stuart Frank.
Ger, in your beautiful photo essay on exposure.co, you mention that he "translated The American Practical Navigator, by Nathaniel Bowditch, into Japanese" which, as we've discussed, I'm very interested in. And you note that "an original copy of the translation resides today in the archives of the Japanese Coast Guard." Thanks again for inquiring about this while you were in Japan. Could you tell me, were you able to learn any more about this? Specifically, I notice in your photo essay that you have included a photo of some mathematical tables: 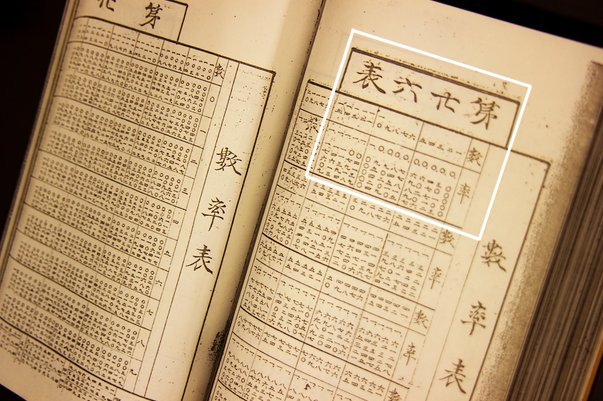 ​
Are these illustrative, sample tables? Or are these claimed to be from "Manjiro's Bowditch"? I don't speak or read any Japanese, but I managed to puzzle out what we're looking at here (what these tables actually contain), and it turns out that they are standard mathematical tables, which had been available in Japan since the 18th century.
Some of you may get a kick out of how I worked this out (English majors, probably not so much.. :) ). I extracted the corner of the tables outlined in white here and rotated them around (see below). I could guess that 0 and 1 were represented by characters similar to the numerals we all use, so that gets us started. Next, tables like this are a lot like modern spreadsheets. There's a column of "entry" numbers where you look up some specific number, which might be an angle or a time or a date or just a pure number, and then next to it there's another number that depends on that entry in some calculated fashion. To decipher the tables we have to figure out the entry numbers and then figure out what's been calculated from those numbers. Of course, when you only know the characters for 0 and 1, you have to do some experimentation ...and some guessing. The first line in the extract of the table says "1" followed by "0' 00000". That is, an entry of 1 apparently yields 0.00000. On the next line, we have some character for some other number, and I guessed that it's the number 2. Next to it, there's a pattern of digits "0' x010x" where x represents a Japanese number symbol that's right at the limit of legibility in the image. And here's where you have to be a little bit familiar with calculations to notice what this might be. The common logarithm of the number 2 is 0.30103". So if that funny character that I've labeled "x" is "3", then we're making progress. So I set up a little spreadsheet to generate a short table of common logarithms, and the pattern matches up perfectly as seen here: 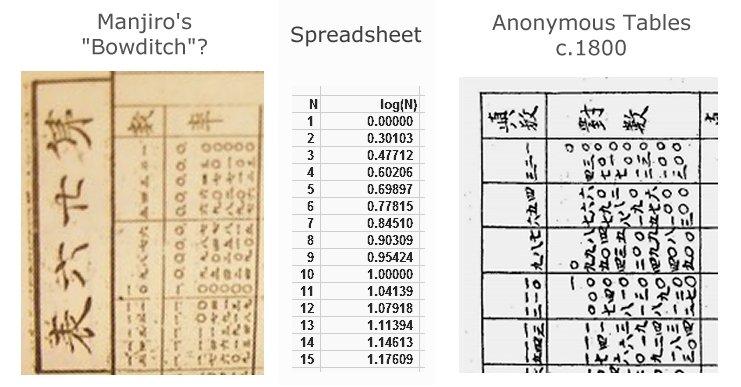 ​
The "entry" column in the extract from the table is the numbers 1 through 15, and the longer numbers calculated from those entries are just common logarithms. They all match up perfectly, and, incidentally, like a Rosetta Stone, this match with a modern tables gives me a dictionary of the digits from 0 to 9 in the style of Japanese numerals used in this table.
Logarithms were invented in the early 17th century by John Napier of Edinburgh, Scotland (you've all heard of Scotland, right?). Tables of logarithms were already available in China in the early 18th century, and they were apparently known in Japan a decade of two later. The right-hand image above is from a table of logarithms that was known in Japan c.1800. So the problem, then, is that the tables here are generic. They do not necessarily represent tables translated or copied from Bowditch's "New American Practical Navigator". There are, of course, tables of common logarithms in Bowditch, but they would have been found in practically any western book of practical calculation in this era, related to navigation or not. And we know that Japanese mathematicians had acquired a number (how many?) of navigational textbooks from the Dutch at Dejima, Nagasaki. The problem from my perspective is that Manjiro's translation of Bowditch's Navigator seems to be rather deeply hidden. If anyone can find me, even a few pages that are definitively from this translation, I would be most grateful. I'm eager to find out what Manjiro actually produced. He surely knew the practical details of basic celestial navigation, but his level of education was very low and a complete translation strikes me as highly unlikely. Did he translate a few chapters of Bowditch? Most of it would have been useless. Did he translate obsolete sections? Were the tables generated by Japanese mathematicians? It's an interesting puzzle because in less than 60 years Japanese mathematicians were among the world's leading experts in producing navigation tables and mathematical methods. Was Manjiro's Bowditch important to that development? Or was it merely an admirable effort, noteworthy as part of the opening of Japan, but ultimately irrelevant to the generation that followed?
Frank Reed
ReedNavigation.com
Conanicut Island USA