Hello fellow Voyagers! I hope you are all well and love hearing about your progress. I'm writing to let you know that I will be giving a free maritime history walking tour coming up in Boston on July 18 called "The Black Sea," which grew out of my Voyager project. If you or anyone you know is interested in joining, please do come and pass it on. More information below and attached!

In the 19th century, Boston's North End - best known for pasta and Paul Revere today - was a gritty waterfront neighborhood known as the Black Sea. On July 18, the Boston African American Historic Site will be offering a special free tour of Black maritime history along the North End's Freedom Trail: from reimagining Faneuil Hall as a site of the slave trade, to visiting the places where the city's first African American landowners and mariners lived and worked, to understanding Black Atlantic global connections and service in the United States Navy from 1812 to 1865. Please join us in front of the Samuel Adams statue at Faneuil Hall at 11 AM on Saturday, July 18, to learn these lesser known stories of the Freedom Trail. 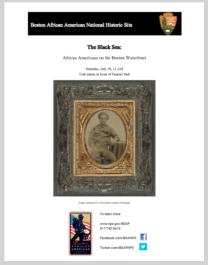