A short message to mark an anniversary...
One year ago today, on July 11, 2014 at 11:06 in the morning Eastern Time, while sailing in light breezes on the southern edge of Stellwagen Bank, a few miles north of Cape Cod's northernmost tip, a Minke whale surfaced just a short distance off the starboard side of the Charles W. Morgan (you can re-read my fish story explaining how I, the famous whale-whisperer, called the whale here). It was the first whale of the 38th Voyage and apparently the first whale seen from the deck of the Morgan in 90 years. Later in the day we saw many humpback whales including Shuffleboard and Pepper. Pepper is the whale in this perfect photo: 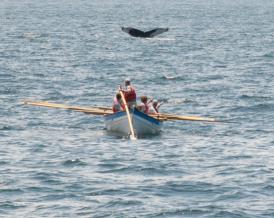