Please help me in spreading the word about a very exciting performance coming up on the Morgan next week!  This will be filmed and shared on the 38th Voyager Website in the near future.

Original Composition by Charles W. Morgan 38th Voyager and Composer to Be Performed aboard the Morgan

Join us Friday, June 12 at 4 pm for a unique experience aboard the whaleship Charles W. Morgan. 38th Voyager and composer, Dante Francomano, has written Cetacean Citations, a contemporary concert piece that will be premiered onboard the Morgan by a group of ten musicians. Jointly inspired by the soundscapes of whales and whaling and sounds he recorded during the Morgan’s 38th Voyage in the summer of 2014, Francomano has crafted a piece that traces the history of relationships between humanity, whales, and the larger natural world. Verbal quotations explicitly mark the progression of these relationships, and they recognize the impact of whales and whaling on American culture. Interwoven with these quotations, a saxophone quartet, trombone trio, and two percussionists (who frequently employ the Morgan herself as an instrument) give voice to the drama of whaling and its role as a cultural crossroads.

Dante Francomano has substantial experience in musical study, performance, and composition, and he approaches all of his projects with creativity and energy. He is originally from Plainville, MA, and he was a 38th Voyager aboard the Charles W. Morgan during the ship’s transit from Boston, MA, to Buzzards Bay, MA, on July 23, 2014.  He recently graduated from Middlebury College in Vermont, where he received a B.A. in Music, and in the fall he will begin a Ph.D. at Purdue University where he will be working at the Center for Global Soundscapes. 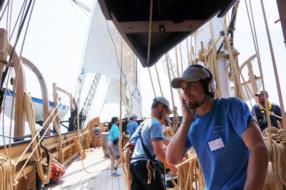